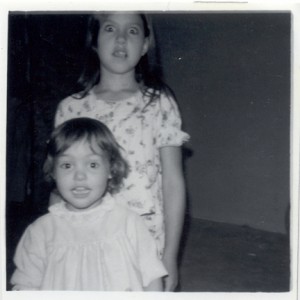 That’s me, the short one in front of my older sister, Rhoda. I’m the seventh of eight kids. I come from a great family. We love getting together. We play games and sing. There are over 50 of us now, so that’s a lot of games of Uno and some terrific attempts at harmony during the Hallelujah Chorus at Christmas. We don’t always hit the mark, but we try. We really try.

In that mix, we’ve got all kinds of health issues. Pretty much anything you can think of, really. And our reunions now include meals where everyone brings their own food and the table has options for everyone from vegetarians to Paleos to allergy sensitives and everything in between. It’s quite a spread.

My mother never gave up. She did research and conducted her own trial studies. Yes, sometimes I was the guinea pig in that study and yes, sometimes back in 1977 I ate things like raw dehydrated seed crackers that tasted like cardboard, but dangit, it was for a good cause. And those crackers got better and better until I actually liked them.

I had frequent urine infections from the age of four. I had low-grade fevers and high white blood cell test results almost constantly. No one knew why that was or what to do with that information except to dose me with fever reducers when my fever got a little higher than my “normal” high and put me on antibiotics for the UTIs.

What my parents didn’t know was that I had mental issues happening at this same time. By the time I was thirty, I would be diagnosed with a few dozen things – mental and physical.

What I believe now, and science findings indicate, is that prolonged inflammation anywhere in the body not only affects those body parts, but also affects the brain.

The low-grade fevers and high white blood cell count test results I had were indicative of inflammation somewhere in my body for years and years but no one knew where or why. If I had inflammation in my brain or my brain was simply affected by body inflammation, I don’t know. Either way, I believe this is the root of the mental issues I’ve struggled with my entire life. New research on gene mutations like MTHFR are starting to shed some light on this for people like me.

Finally, at age 42, my brain started feeling differently than I could ever remember. It felt like what I imagine a “normal” person’s brain feels like, without the internal chatter of extra personas vying for attention or the intense inky, black downs of a person with manic depression or the helium-highs of the bipolar brain.

Yes, I know that there is no “normal” anymore, if there ever was. It’s a figment of an ill person’s imagination – a wisp of silky hope they hold out in front of them that eludes their grasp, a place they can never reach. That’s because it doesn’t exist. But in this context, I mean to use it as a general baseline, where that baseline is a person that hasn’t struggled their entire life with multiple personalities, bipolar disorder, depression, anorexia, disordered thinking, suicide ideation and more. (Still with me? Good.)

I had eating disorders in high school. What started in elementary school as stomach aches and possible food allergies became an easy transition into controlling my life with food. When I got pregnant at the age of seventeen during my junior year of high school, my body was literally starving to death, I’d already been in an eating disorder program, in talk therapy, and on antidepressants.

I continued to lose weight up until my fifth month of pregnancy, at which point my doctor, my dad, put me on a weight-gaining program for the sake of the baby. I drank a lot of flour-tasting drinks the consistency of paste. And I gained about fifty pounds in three months.

After my son was born I had three more kids in the next five years. I lost and gained weight. My brain ping-ponged between unhealthy and a bit more stable before dipping to “really-in-a-bad-place” and then back up again. I sometimes felt suicidal. I tried various med cocktails. I went in and out of talk therapy. I tried various creative outlets. I spent weeks almost comatose. I nursed a pretty healthy alcohol problem for some time trying to self-medicate while my kids mostly raised themselves.

Unless I was awesome, I mean. Because if I was up? I was awesome and the best mom you’ve ever seen. But that’s the thing. You just didn’t know what Mom you were going to get that day.

When my daughter was eight, her cat scratched the back of my shoulder when I was trying to give it a bath. The claw went in and out of my back, deeply puncturing before retracting, leaving the crud under the cat’s nail deep in my shoulder. I mention this because people who develop an autoimmune disease will have an “event” that triggers their immune system to begin overreacting, and some of my doctors believe this is mine. For some people, it can be a tick bite or something else that makes your immune system kick into high gear. For me, it was a kitty cat.

After Tiger clawed me, I developed a low-grade fever that didn’t go away followed by a headache. A week later I had a lump developing under my right arm in the center of my armpit. It hurt. It was red and tender. And it was growing larger every day at kind of an alarming rate. And I was tired. Man, was I tired. Like you just ran a marathon tired. Not that I would know because I never have, but I imagine that’s what it would feel like.

I went in to see the doctor and she told me not to worry too much because it most likely wasn’t cancer because cancer hardly ever grows fast and it hardly ever hurts, but whatever it was, it was ugly and mean and we should get it out. I agreed. She scheduled me for the next morning, because for all her pshawing, she actually was concerned.

She removed a plum-sized, gnarled mess that was an enlarged lymph node. She had to cut through some nerves (which took about 8 years to reconnect). She told me I had Cat Scratch Fever. I thought she was kidding. She was not.

She warned me that I would be tired for a few weeks and to take it easy. (I felt like a semi had driven over me for about a year.) She put me on some heavy antibiotics and gave me a pressure sleeve to wear to avoid lymphoma, which I was in danger of developing.

And I remember thinking things like, “I don’t know what just happened,” and “That was weird,” and ‘What’s Cat Scratch Fever?” And then I spent the next ten years just not feeling that great.

So, that was my Event. Or rather, An Event. Because about exactly ten years later I went to Colombia and met Juan Valdez on a truly wonderful trip to learn about coffee and was stung on both ankles by dozens of gigantic red fire ants on a beautiful mountain in Pereira. My ankles were swollen for days and the bites were quite remarkable. I was exhausted for weeks. The penny-sized scars from the welts were dark maroon and visible for over two years. Some of my doctors think that could be my Event. Or another Event. Why not have two?

In any case, an Event pushes the immune system of a person pre-disposed to an autoimmune disorder into system shock. Their immune system begins to work and work and work and work, doing a really good job working and working and then when there isn’t the problem to work on anymore, such as the ant bites begin to heal, the immune system doesn’t get the shut-off signal and doesn’t stop working. And all that’s left to work on is healthy stuff, which unfortunately won’t stay healthy for long. In my case, it was my chest and lungs as well as my digestive tract as a secondary issue. Throw in some joint issues and you’ve got a party. And along with those challenges, my mental health sometimes worsened in ways that seemed unpredictable. At the time, I had no way of knowing how intricately our digestive tracts and minds are connected.

I didn’t know it was lupus yet. It took years of frequent vomiting up what seemed to be unconnected foods at random times and bouts with diarrhea, urgent care visits because I was unable to breathe due to rib pain and pleurisy, feeling depressed because I couldn’t figure out what was going on with my body, weight gain and more weight gain, aching legs and joints, a failing thyroid, and more doctors than I can count looking at me like I was crazy before I’d get that part diagnosed. I call those years the “Ish” years. I was Chronic Fatigue-ish. And Fibromyalgia-ish. Walking Flu-ish? Maybe Parasite-ish? And a lot of other Ishes.

So. How does someone with a plethora of chronic issues, small or large, go from there to somewhere way more healthy and full of positive energy with a singing heart? Did I find some magic pill and now everything’s perfect? Did I win the lottery and drink from the fountain of youth? Has every day since 2011 been a day where I exercised for 30 minutes with energy to spare, drank green smoothies, volunteered with the homeless, and slept like a log? No, my friend. No.

In short? I embraced every holistic healing modality that I felt might make a difference for my health. I kept the ones that actually worked for me and let go of the ones that didn’t. I stopped reaching for over-the-counter medications first and instead found ways to treat my body as a whole instead of just getting rid of the annoying symptoms. I spent time getting to know myself in a whole new way and I opened my mind to believing that anything was possible. And I let go of my Diagnosis Score Card all together and embraced new language about myself.

My story and journey in no way invalidate your story and your journey. Things that work for me might not work for you. (Things that work well for me one day might not work well for me the next.) But all I can do is share what I’ve learned along the way and hope it might help someone else. If that’s not you, no worries. I hope you find something else that does help. (<3 heart emoji here!) Please bear with me while I over-explain a little of how I got to where I am now. Some of it gets a little science-y. I have a lot of research to share with you. I’m condensing things, obviously, but along the way you’ll find references to books I love and people that are super smart and inspiring. I encourage you to seek them out and do more research on your own.