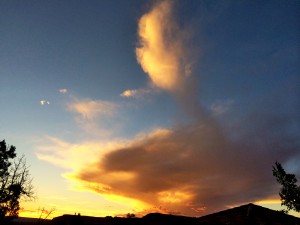 Here’s the exciting thing about our bodies: when we start to heal one part of our Us, other parts jump on the bandwagon. It feels good, all this healing.

Figuring out how to heal your body will affect your mind. If you currently struggle with depression and/or mania, mind chatter, or have sleep issues, even ADHD/OCD tendencies, healing your gut will help ease how these symptoms manifest. To understand why, we have to get a little science-y again. Ready?

Over 90% of your serotonin is actually manufactured in your gut. Your gut contains 100 million neurons. That’s more than the spinal cord. Besides serotonin, the gut contains other major neurotransmitters like dopamine, glutamate, norepinephrine and nitric oxide. Also, two dozen small brain proteins called neuropeptides are in there along with major cells of the immune system. Enkephalins (a member of the endorphins family) are also in the gut. It’s also a rich source of benzodiazepines – the family of psychoactive chemicals that includes such ever popular drugs like Valium and Xanax. Perhaps that’s one reason antidepressants, which raise serotonin levels in the brain, are often ineffective in treating depression, where as changing your diet can work.

Our gut has been referred to as our Second Brain. It’s actually as smart as a cat and can work independently of the central nervous system. 90% of the info going through the Vagus nerve is going up, not down. A big part of our emotions are probably influenced by the nerves in our gut. Butterflies, for example, when we get nervous, tells us that our gut is signaling as part of our physiological stress response.

Serotonin has so many important jobs in your body it’s hard to overstate how much we need it. It contributes to your well-being, happiness, sleep and yes, bowel-movements. It also helps with cognitive functions, like, you know, thinking, including memory and learning.

In your brain, of the approximately 40 million cells there, most are influenced directly or indirectly by serotonin. That’s where our moods get regulated along with sexual desire and function, appetite, temperature regulation, and some social behaviors. But beyond that, serotonin affects our cardiovascular system, muscles, and various elements in the endocrine system, which we already know in a chronically ill person doesn’t work very well.

If we get glitches in our systems where serotonin should be working, we can get depression, obsessive-compulsive disorder, anxiety, panic and even excess anger.

Then we have dopamine. Dopamine is actually manufactured in your brain initially but then quickly gets taken down to your gut where its job is to help get nutrients out of the foods you eat. It’s supposed to protect your intestinal mucosa, which in turn maintains your immune function. If you have too much dopamine in your system not being used, you get mania. If you have too little being sent there, you get depression. For someone with bipolar tendencies, dopamine regulation is huge.

Studies are being done right now to assess how our gut works with our immune response because up to 70% of our immune system is aimed at the gut to expel and kill foreign invaders.

UCLA is doing research on how the trillions of bacteria in the gut communicate with the enteric nervous system. Dr. Mayer from UCLA has made the psychiatric world consider expanding how to treat the second brain in addition to the brain on your shoulders when it comes to looking at mental issues. He says, “The majority of patients with anxiety and depression will also have alteration of the GI function.” It’s no wonder your stomach starts to churn when you get nervous.

Most of our gut bacteria, also called our gut microbiome, has co-evolved over millions of years to live a symbiotic life with us. Many of the bacteria are beneficial and can function as a type of DNA. They produce their own enzymes and other products that help process our foods. The gut microbiome is the connection between your diet and your genetics.

Serotonin produced in the gut gets into the blood where it’s involved in repairing damaged cells in the liver and lungs. It also helps the heart and helps to regulate bone density. If you have Irritable Bowel Syndrome, however, your serotonin does not get transported, which means it’s just all down there in your gut, floating around, making trouble and causing diarrhea, and creating antibodies that attack and kill neurons in the gut. The excess serotonin then overwhelms the receptors in the gut, shutting them down, causing constipation. This is a cycle that many people experience, but don’t understand why it’s happening.

This all ends up causing chronic inflammation and scientists are starting to make the connection that chronic gut inflammation is tied to a variety of brain disorders (Sorry, auto-play). For example, if you look at Parkinson’s Disease, the jerky movements and loss of muscle control are caused by a loss of dopamine-producing cells in the brain. However, it’s been shown that the protein-clumps that do the damage, called Lewy bodies, also show up in the dopamine-producing neurons in the gut. The distribution of Lewy bodies in someone who’s died of Parkinson’s Disease indicates it might even start in the gut as the result of a trigger like a virus and then spread to the brain via the Vagus nerve.

The same type of studies are being done with Alzheimer’s patients and those with Autism. How much has our diet in the last 50 years changed our gut flora? What happened that made diseases get so prevalent? Why does it seem like everyone and their dog is gluten-sensitive and all your friends are in therapy or should be?

Here’s how modern pharmacology works: You feel sad, depressed, manic, angry, or any number of other unhelpful or challenging symptomatic feelings. You go to the doctor and they prescribe a synthetic medication to help regulate the dopamine or serotonin that your body is not regulating correctly. You take that pill, it’s broken down in your belly, sent to your intestines and then taken up to your brain where it plugs into the receptors that are waiting. Once those receptors are filled with the synthetic versions, any natural hormones your body is actually making and trying to use get locked out, which is the point and what those meds are trying to do. This promotes less production of the natural forms from your body because they keep being told they don’t need to be made. This makes a body more and more dependent on the synthetic versions which only target the specific receptors and not the underlying issues causing the problems in the first place.

Let me say that without modern pharmacology I would be dead. More than once. My body was in such a chronically ill situation that the levels of natural dopamine and serotonin being produced were either so low as to not register or my body simply couldn’t utilize it. So, please understand that I am not an advocate of a “never-take-Western-drugs” lifestyle. I’m simply trying to help you understand what happens on a biological level when you do.

Let’s take a closer look at what’s happening: During fetal development, the tissue in your brain and spinal cord and the tissue in your gastrointestinal track is identical. Over the course of gestation, you end up with two nervous systems: one up top and one down below. The enteric nervous system, which is the one in our gut, is connected to the top one in our brains by the tenth cranial nerve, or the Vagus nerve, which runs from the brain stem to the abdomen. It is along the Vagus nerve that these two nervous systems communicate.

Our enteric nervous system has about 100 million nerves embedded in our gut walls and controls every, single part of digestion. That’s about 30 feet of a conversation that needs to happen between our guts and brains. When it’s working correctly, you know to stop eating because you’re full and your stomach has expanded to a certain size. It’s where you feel the Fight or Flight we explored earlier when your stomach juices are inhibited and blood flow to your gut is reduced as more goes to your chest and muscles in case you need to run or beat someone up. It affects how we get nutrients from our food. It affects our quality of life!

Continued and exacerbated inflammation in these areas cause infection in the gut which produces pain, gas, bleeding, nausea, diarrhea and even more exciting issues. Those issues then produce mental challenges including anxiety, cognitive and behavioral problems. Instead of your brain calling the shots in this relationship, it’s actually the gut that sends far more information to the brain that the reverse. When you’re taking an anti-depressant which is meant to raise the available serotonin level in your brain, it might not be getting all the way up there and instead getting way-laid in the gut where it’s ineffective. Healing the gut can help get the message up there, synthetic hormone or natural.

If your gut is in a state of disrepair, if it’s swollen and unable to digest foods, if it’s inflamed, your serotonin could either not be being manufactured to begin with and/or what is there can’t travel up to your brain.

The flora in your gut play a vital role in your mental health. A healthy gut fosters the conversation that must happen between your two nervous systems. An inflamed, chronically ill gut cuts off the conversation.

To heal your gut and to improve your mental health, food choices are number one. All the things we already covered including the food diary will help you identify what’s good for your own particular system. But beyond that, there are things you can do to promote your gut healing faster. Among them are adding probiotic foods and incorporating fermented foods in your diet.

But it’s also important that you leave out things that do damage. High among those are things we’ve already covered, like refined sugars and processed foods which feed bad bacteria and yeast and destroy the healthy microflora. But other things to consider are antibiotics, conventionally raised animal products, antibacterial soaps, fluoride and anything that could be considered a toxin like heavy cleaners.

Fermented foods and those in the cruciferous family help reduce your toxic load in general and help your body rid itself of heavy chemicals. If you eat a variety of those types of foods along with other high quality foods, your body will thank you. If you just can’t handle fermented foods yet, take a probiotic supplement that will reach your intestines intact. (Some kinds get eaten up in stomach acid – that won’t help the healthy flora in your intestines.)

Healing your gut will heal your brain. If we only put in foods we can easily digest and that promote wellness, our guts heal and in turn can help our brains heal. Our brains and guts are intimately connected and share the same types of hormone receptor sites so helping or hurting one helps or hurts the other. Helping our bodies create and deliver their own hormones to both places helps your gut and brain have the continuing conversation together that they are meant to have. You’ll feel the difference all over your body.

Make your own super healthy probiotic fermented vegetable. It’s simple and only takes a few minutes to start.